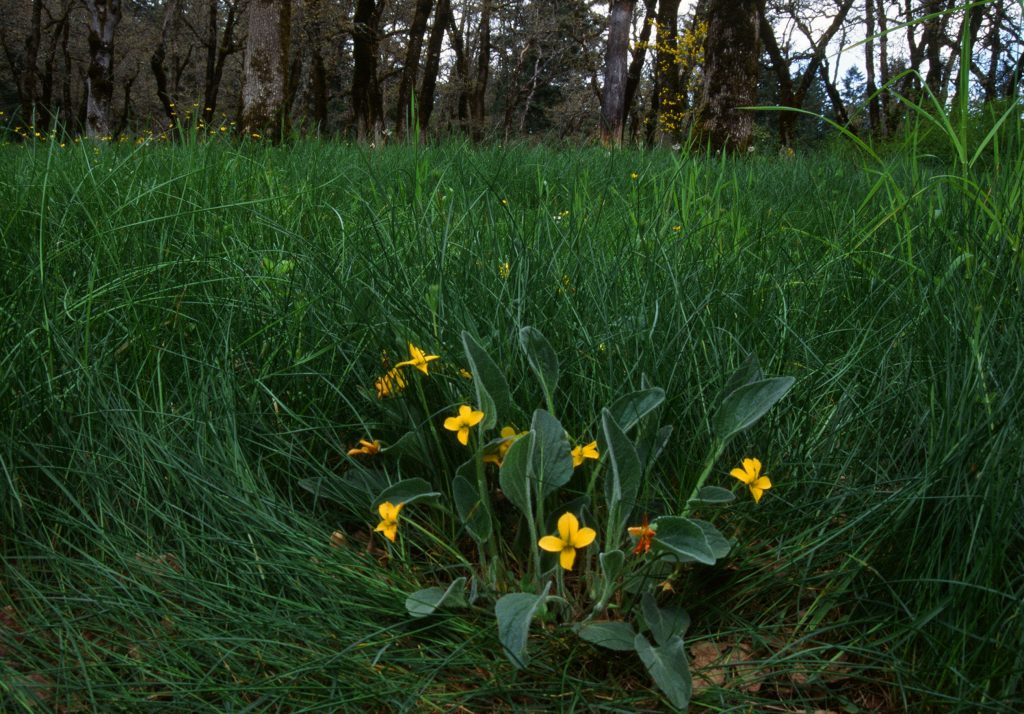 ‘Praemorse’ means ‘as if bitten off’, but I have never seen leaf tips which have this characteristic. See Brainerd, p. 107, ‘praemorsa’ refers to ‘the condition of the rootstocks in the dry, sandy soil where they grew.’ Read all of his description again.

Must re-research V. nutallii vs. V. praemorsa var. altior. Davidse (1968 and Fabijan (a987). I think that the Boulder plants east of the mountains and representing western edge of the prairie species are the only V. nutallii and all west of this are V. praemorsa var. elatior, but I do not know the differentiating morphological characteristics. Good notes in Intermountain Flora.

Ecology: Habitats and ± range of sp

Ecology: Habitats and ± range of sp.

To and From Cambridge B.G. herbarium:

Please will you tell me if the herbarium possesses the type specimen of Viola praemorsa Douglas, which was probably collected in 1826. I have read that a photograph of the original type material is in the herbarium at the California Academy of Sciences, San Francisco, USA, and wish to verify the existence of the type specimen, as it was previously thought to be lost.

Thank you for your e-mails regarding the Type specimen of Viola praemorsa Douglas and the query raised by Dr. Noel Holmgren.

We have no specimen designated as the type of V. praemorsa at CGE.

We do however have 2 Lindley sheets of V. praemorsa from North West America collected by Douglas. One sheet has the name V. praemorsa Douglas, in Lindley’s hand at the bottom right hand corner, but neither are dated. These sheets may have type status, but I am not sure either are the lectotype.

Problem: It clearly states in Bot. Reg. 15: t. 1254 (1829) that the drawing in the publication of V. praemorsa was made in the Garden of the Horticultural Society in 1828, but no comment about where the description came from other than, “according to Mr Douglas”. Did Douglas publish a description before 1829 somewhere else, in a Journal? (Hookers Jour. Bot?) or………. should our vast collection of Lindley Violas be searched for a specimen, probably without a name, cultivated in the Garden of the Horticultural Society on which the bot. Reg. publication was made by Lindley?

Clearly more time required for research of this question than I can give.

Assistant Curator of the Herbarium

Collected (chasmogenes) by me at Vail, Colorado, very pale cream, 2.9 x 1.7 mm.   Were these seeds mature? Don’t know, they were sent to Eliz. Raines. Probably were or I wouldn’t have bothered to send them. So why are they a different colour from those above, collected by Adolf Ceska on Vancouver Island. Because it is more upright, I think it may be V. praemorsa. Remember comments of Sally Walker when she saw my photos.   Bill Weber said: I doubt that your plants near Vail would be nuttallii but probably praemorsa or vallicola. Fabijan et al say that this is V. praemorsa ssp. linguaefolia (Nutt. Ex T. & G.) Baker, but Holmgren says praemorsa and linguaefolia are synonymous. V. nutalli var. major is now V. V. praemorsa var. altior, see Holmgren]

Seeds collected SE of Orick, Balls Hill Road, (east of Redwoods), n. CA, which I thought was V. quercetorum, had a thick taproot, seeds large, pale brown, 3.3 x 1.7 mm. P.15. They are praemorsa ssp. praemorsa, according to maps in paper by Fabijan et al.] Coast Ranges, on Franciscan rocks, a jumbled mess of muddy sandstones and cherts interlayered with basalt lava flows, the entire assemblage so thoroughly folded and sheared that some large outcrops look as though they have been stirred with a stick..

Area to east of Tom and Inger Burns (Telephone Flat):   Most of the country on the east slope of the Cascades is dry enough that there are numerous good outcrops of dark volcanic rocks, the black ones are basalt and all those that aren’t quite that dark are andesite. Some of the weathered rocks are stained bright red by iron oxides. Along most of the route between Chiloquin and Klamath Falls, US 97 follows a narrow shelf between Klamath Lake to the west and high cliffs of very young volcanic rocks to the east. The cliffs are fault scarps created by recent crustal movements that created the basin now filled by Klamath Lake. Faults in this area trend generally northwesterly and have moved vertically, raising the hills and lowering the valleys. Many of them show signs of quite recent movement so it seems likely that these faults are still active and likely to move again causing earthquakes.

From map in paper by Fabijan et al, in the area of Inger’s Telephone Flat, there are recorded three species: V. praemorsa ssp. praemorsa, V. p. ssp. linguaefolia, and bakeri.

[Look to see if my photos are more like the plants at Vail, or like the ones on Vancouver Island.] Remember vernal pools on Telephone Flat, where these plants were growing, also V. purpurea, but this was outside, and surrounding, the wetter area of V. praemorsa.