This pretty little violet may produce one or two entire leaves in early spring, but the typical leaf from is pedate, with 7 to 9 slightly oblanceolate lobes. It grows in moist places in pine forests in the southeast. It rarely forms dense clones or mats; instead the plants occur singly, often widely separated from each other.

In the discussion of Viola pedata, its similarities to that species and to V. brittoniana, which replaces it in the northeast, were mentioned. [=Viola pedata has long been considered to be very distinct from other violets and to have no close relatives. However, on morphological grounds, there are two other violets which resemble it: V. septemloba and V. brittoniana. Their similarities and ranges suggest that they form a small species complex, perhaps derived from a single ancestral form. I don’t agree with this. I see V. septemloba and V. brittoniana as being much more like V. pedatifida.] I have seen some specimens with leaves almost identical to those of V. pedata. Both Gray and Brainerd (Brainerd, 1921) considered it to be most closely related to V. palmata. It does not appear so to me. [Kim, 2008: I think V. septemloba and V. brittoniana are the same, but flower not similar to true/pure V. pedatifida. Also, I have found hybrids of V. pedata with V. sororia that are similar but not the same as the two former species. V. septemloba LeConte (1826) predates V. brittoniana Pollard (1898).]. In the southeast, it is most easily confused with V. esculenta, and can sometimes be distinguished only with difficulty. I have found the shape of the leaf lobes the best feature. V. esculenta has broader, more obovate lobes, more similar to those of V. triloba var. triloba.

Interesting that Harvey has changed Viola brittoniana back to species rank from the treatment of McKinney!! and he says that seeds are brown, cf. Viola Brainerd Baird who says that seeds are buff [most probably immature, same problem as Landon McKinney’s similar errors]. [BUT THEY ARE BUFF, in NJ]. She says V. septemloba’s seeds are dark brown. Looking at the very short pubescence on the leaf margins and leaf upper surface veins, it is identical in distribution, size and shape for both species. I think that there is no justification in separating Viola septemloba from Viola brittoniana, and the former species date of publication takes precedence.   I do not think that there is sufficient difference in leaf lobe patterning to make any distinction. Over such a wide distribution in longitude, some variation in leaf division patterning can be expected, also in presence or absence of hairs on sepal margins. We ignore such variation in species such as Viola sororia.

McKinney, L.E. & Russell, N.H. 2002. Violaceae of the southeastern United States. Castanea. 67(4): 369-379. This publication treats this taxa as a spp. only, without mentioning of what it is a sub-species:  ‘ssp. septemloba. Southern Coastal Violet. Earliest leaves reniform, ovate, deltate, to trifid in outline with the latter occasionally persisting, later ones reniform to ovate in outline and parted or divided into 7-9 narrowly elliptic, spathulate, falcate, to linear segments, margins entire or sporadically serrate or with occasional narrowly deltate to falcate appendages or teeth, apices acute to mucronulate, bases broadly cordate to cordate. Sandy pine or mixed pine/deciduous woods, swamps; AL, FL, GA, LA, MS, NC, SC.’

Brainerd, E. Violets of North America: This species is said to grow in Carolina and Georgia only in pineries, through what is called the lowlands. Its peduncles often eight inches high are adorned with flowers two inches in diameter. The present known range of the species is from southeastern Virginia to Florida, in the tide-water plain and west to Biloxi, Miss. The foliage of the plant is extremely variable. The first leaves often, and sometimes all the leaves, uncut; the others primarily 3-lobed, 3-cleft or 3-parted with widely open sinus, the middle segment uncut, relatively long and broad, usually narrowed at the base, the lateral segments (sometimes uncut) but generally pedately cleft into 2-4 narrow divergent parts that become smaller toward the base of the leaf. V. septemloba has been often confused with V. Brittoniana, a cut-leaved species of the same group and of similar habitat. But they differ in three respects:

Ezra Brainerd (1904) included V. brittoniana under Viola septemloba saying he could not see them as being specifically distinct. Confined to New England coastal regions.

Viola Brainerd Baird, Wild Violets of North America: The Southern Coast Violet is glabrous throughout, except for a minute pubescence on the upper surface of the leaf. [my plants also had minute pubescence around the leaf segment margins, same as V. pedatifida. I made a note in FL that it had shiny dark green leaves, and no glands in axils]. The leaves and flowers arise from a stout, vertical rootstock with many strong roots. The leaves are extremely variable. The early and late leaves, and sometimes all of them are uncut. If the leaves of flowering time are cut, they are pedately three-lobed, cleft or parted, with the middle segment uncut. The middle segment is relatively long and broad and usually narrowed at the base. The lateral segments may be uncut, but are usually cleft into two to four narrow divergent parts that become smaller toward the base, with the basal or lowest segments pointing downward. The flowers are borne on peduncles three to six inches long, which exceed the leaves. They are large, one to one and one-quarter inches across [she has corrected her father’s measurement] and very striking. The petals are soft reddish violet to dull reddish violet, the three lower are white at the base and conspicuously veined with darker violet. Dense white beards are on the three lower petals. The closed flowers are on erect peduncles, the capsules are green, oval to cylindrical; the seeds are dark brown. The violet is abundant in the pine barrens of the coastal plain from southeastern Virginia southward to Florida and westward to southern Mississippi. It blooms from March to April and is one of the most beautiful violets of the South. It is closely related to V. Brittoniana, although they do no overlap in their distribution.

My description of the plants I saw in Florida, near Pensacola [Garcon Point Water Management Area, north entrance, on Route 191 about nine miles south of Milton in Santa Rosa County] in an area described as ‘wet flatwoods’ on 12-14 March, 2008, altitude about 10 feet:

Acaulous herbaceous perennial. Plants grow very tall at time of first flower. Vertical rhizome. First two leaves undivided, next leaf with one shallow division, later leaves divided into 7-9 lobes, middle lobe widest, obovate, leaf outline wide ovate with cuneate base, most mature triangular with truncate base, no glands on leaf margins in the axils of the leaf segments (cf. V. pedata has glands in axils), leaves tinged purple, mid-vein purple, all veins on lower surface dark purple, leaf margin purple, also purple marginal glands, margin ciliate, also on veins of upper leaf surface; petioles purple, glabrous; stipule 1.1 cm long, with glandular-tipped fimbriae on margin scarious, translucent, not adnate; bracteole green + purple, long-triangular with fimbriate margin, 7 mm long, in middle of long, green+purple, glabrous peduncle. Peduncle longer than leaves plus petiole, i.e., flowers well above the leaves. Sepals plus auricles 7 mm long; auricles 1.5 mm, uneven in size, three largest toothed at end, two in between ones very narrow, undivided, not adpressed to peduncle; sepals with few very fine cilia on hyaline margin mostly towards the tip, otherwise glabrous, with wide mid-vein. Flowers relatively large, 2.2 x 2.0 (wide) cm, purple (RHS 87A) with white centre on all petals, most obvious as half of the lowest petal, white half heavily veined with purple, hairs on inside of all five petals mostly on the white parts and not the purple veins, hairs on spurred petal more dense than other petals, hairs stiff, straight, 1 mm long, pointing straight up; hairs on lateral petals longer, 1.5 mm, straight, fine, silky, some hairs on purple part of petals, hairs on inside of top two petals scattered on purple, some more on white at base, but not as dense as on three lower petals. Lowest (spurred) petal longest, truncate at end; spur large, purple same colour as petals, 2.5 mm long, 3 mm wide, saccate, rounded at end; ovary green, glabrous, style not geniculate, style and stigmatic head pale green, stigmatic head concave on top, stigmatic aperture at end very narrow, fine beak. Style head very similar to that of Viola missouriensis. The painted illustration of E. Brainerd’s specimen from near Sommerville, SC shows a leaf that is exactly the same as my drawing for Viola brittoniana!! I must try to collect seeds from both plants to determine whether the seed differences mentioned by E. Brainerd actually are true, because the other two factors of difference could be disregarded. If the seeds are the same colour when mature, this name (1826) takes precedence over the name V. brittoniana (1898).

The ciliate margins and ciliate veins are very similar in structure to the leaf of Viola pedatifida when viewed under the microscope. Also petal indumentum description is the same [from my own description].

This species is almost identical to Viola brittoniana, growing on similar sandy soil. Same tall plants, slightly smaller but still large flower, same truncate lowest petal, same spur, same colour distribution and indumentum of petals, except that for V. brittoniana I have recorded the sepal margin as glabrous [did I look under the microscope??]. Other differences are, for V. septemloba, position of bracteoles is about one quarter down, cf. middle, very short hairs on lamina of leaf top, cf. veins only, slightly smaller stigmatic head and larger opening, shorter ovary plus style.

Russell’s key separates on number of leaf blades (V. brittoniana 9-11 linear lobes, V. septemloba and V. egglestonii narrowly oblanceolate 5-7), then separates the latter two on the coarseness of the marginal teeth and whether the central lobe is divided (V. septemloba moderately or shallowly toothed, the central leaflet undivided, V. egglestonii coarsely toothed margin and central lobe divided). McKinney and Russell’s separation of these species also depends on the shape of the leaf base (ssp. septemloba with bases broadly cordate to cordate, ssp. egglestonii bases truncate to cuneate). Note that this latter publiction refers to these two taxa as sub-species without specifying of what they are sub-species. This seems to be in the recognition of their compound/hybrid origin?? But this publication only lists ‘missouriensis’ and ‘sororia’ as varieties again not mentioning of what they are varieties.   No one mentions the difference of the limestone substrate in which V. egglestonii grows, compared with the very sandy acid soil location of both V. brittoniana and V. septemloba.

Peterson Field Guide repeats the colour as deep reddish-violet with a conspicuous white throat [good phrase to use!], 3 lower petals densely bearded. I did not record it as being unduly red, just violet. RHS 87A.

The difference between this species and V. pedatifida is that the latter is not coastal, flowers are bluer, leaf lobes are very narrow.

Must refer to the paper (printed out):  Winn A.A. & Moriuchi K.S. 2009. The Maintenance of mixed mating by cleistogamy in the perennial violet Viola septemloba (Violaceae), American Journal of Botany 96(11): 2074-2079. Attached to email from TM, 10 Nov 2009. Very useful information about cleistogamy vs. chamogamy and relative benefits. 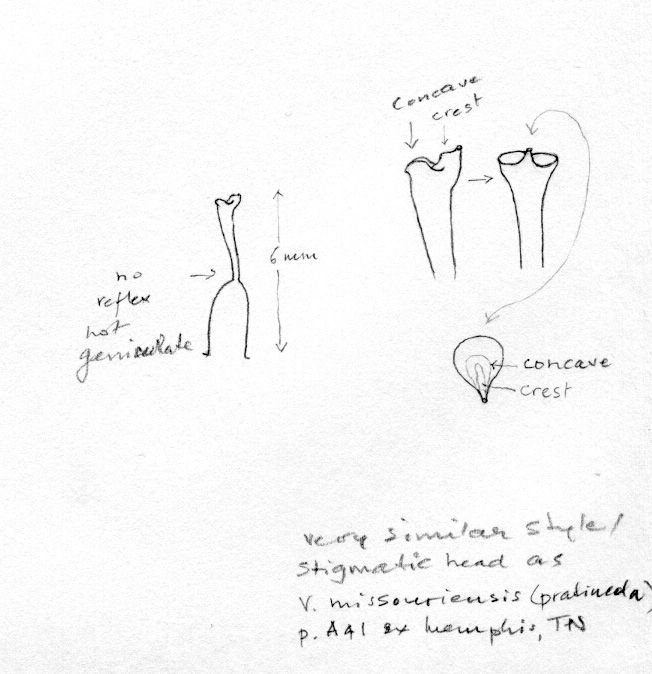