Description. Illustrations: 7 photographs of Viola canadensis (and variants) and 3 drawings.

A beautiful woodland plant, Viola canadensis is the tallest native violet species in North America with strong, upright, leafy stems and broadly heart-shaped leaves. It can be distinguished from other white-flowered violets by its bright yellow center, and by the purple tint on the back of the upper two petals. It is the most recently evolved species in subsection Canadenses that had its origin in the region of the Pacific northwest. In spite of its name, the Canada violet is not restricted to the north but is the most widely distributed species, extending its range south into Mexico and throughout the eastern states. It does not occur in the triangle of southern states formed between Texas, Missouri and Florida, nor on the Pacific coast.

Plants are spread both by seeds and by a white underground branching rootstock. The latter can vary from thick, short, slow-growing rhizomes to elongated, narrower, stolon-like rootstocks. In the first season of growth, only basal leaves appear; stems are produced in following years, at flowering 10–25 cm high, extending to 40 cm in summer; stems glabrous to puberulent, colored purple at the base.

Plants produce both large basal leaves on long petioles and smaller, shorter-petioled leaves on the upper stem. All leaves are glabrous to moderately ciliate, usually on veins on both surfaces, with crenate-dentate margins; basal leaves about as long as broad, wide-ovate to reniform, tip acute, base deeply cordate, basal lobes one third as long as the lamina, separated by a narrow sinus. Summer basal leaf blades can reach 13 cm though high altitude plants are smaller; upper cauline leaves are longer than wide, long-ovate to narrow-ovate, tapering to an acute tip, base slightly cordate to truncate.

Flowers have a slight perfume and are produced from mid-spring to early summer, the dates depending on altitude. They arise from the axils of the upper leaves, the green peduncles varying in pubescence; bracteoles are above the middle, triangular, with ciliate basal lobes, thin, colorless, light green or light red-purple.  The relatively large, 1.5 cm, flowers are white on their face, sometimes aging to pale pink, with a prominent yellow center. Petals are purple on the back mostly on the two top petals, the dark purple color especially noticeable on the buds. The three lower petals have short purple guidelines; the lateral petals with colorless clavate hairs; spur short, rounded, white to pale green, 0.5–1.2 mm long. Some populations have pinkish flowers, very rarely dark pink, or white with no color other than its yellow center. The ovary is glabrous, green, scabrid or short ciliate; the top of the stigmatic head indented, with hairs around the back and sides, the small stigmatic opening has a short lower lip. The calyx is glabrous or ciliate; 4-7 mm long; sepals narrow and separated, lanceolate, recurved and with a sharply pointed tip; the auricles are very short, held well way from the top of the peduncle, and often colored purple.

Only chasmogamous seed pods are produced by this species. They are green, subglobose, scabrous to puberulent, 5-7 mm; seeds dull, dark brown to black, 2.1-2 x 1.4-1.8 mm, all seed dispersed by mid-summer.

V.canadensis is found in the shade of cool rich deciduous or coniferous woods in relatively moist places, on neutral to alkaline deep loam with good drainage. It is extremely cold hardy. From near sea-level in far northern lowlands to 3,625 m in southern latitude high mountains it occurs in forests of aspen, oak, maple, or beech.

This species covers the widest range of North America: in Canada, from eastern Alaska to New Brunswick, and in most states of US but excluding California, western Washington and Oregon, and the sosuth and southeastern states of Florida, Kansas, Louisiana, Mississippi, Missouri. Oklahoma and Texas. 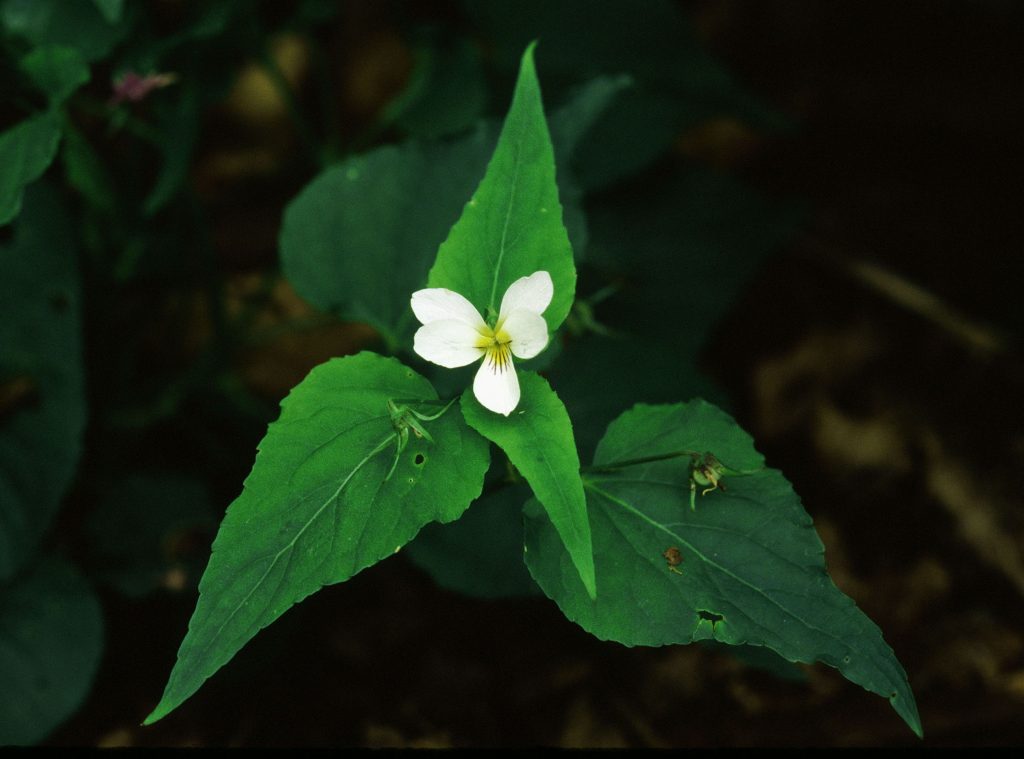 2N=4x=24. The only tetraploid species of the subsection, V. canadensis (4x) possesses two closely related Canadenses genomes and is an autotetraploid (Marcussen, 2011). The allopolyploidy event for V. canadensis occurred approximately 7.8 million years ago.

Over its wide range there are variations in plant size, rhizome length, leaf shape, pubescence and petal shape. Russell (1965) argued that there is only one single species, but two varieties: an eastern and western var. canadensis and a mid-western var. rugulosa. The latter plants are more pubescent, the rhizomes longer and cord-like, the basal leaves more reniform (wider than long) with acute apices, and its leaf bases usually overlapping.  As the name ‘rugulosa’ suggests, the leaf lamina is undulating and raised between the veins, but this is a characteristic of both varieties. V. c. var. rugulosa grows in open, sandy soil in often disturbed habitats, occasionally in pine forests. The Rocky Mountains plants are not distinguishable from the eastern form, but when growing at higher altitudes, plants are smaller. However, whether there is enough evidence to separate this species into two varieties is by no means clear as var. canadensis type plants are found in var. rugulosa range, and vice-versa

V.canaadensis should not be confused with two white flowering species from the same subsection, V. cuneata or V. ocellata that both also posses a central yellow eye, because their ranges do not overlap. Ballard (1994) in Violets of Michigan observed that hybrids can be found between V. canadensis and V. pubescens.