Baker’s original 1938 description of V. clauseniana stated that it is sharply distinguished from any other known violet by the lack of hairs on the inside of any of the petals, the deltoid (triangular) leaf outline and the prostrate habit of the leaves. Similarly, the observations of Clausen published in 1964 are very valid today: V. clauseniana exemplifies how, among the violets, a species can become genetically isolated from most of its morphologically closest relatives. It has a precariously small, specialized habitat within Zion National Park. It is closely related to V. nephrophylla, its blue flowers being almost identical but for the petal hairs. 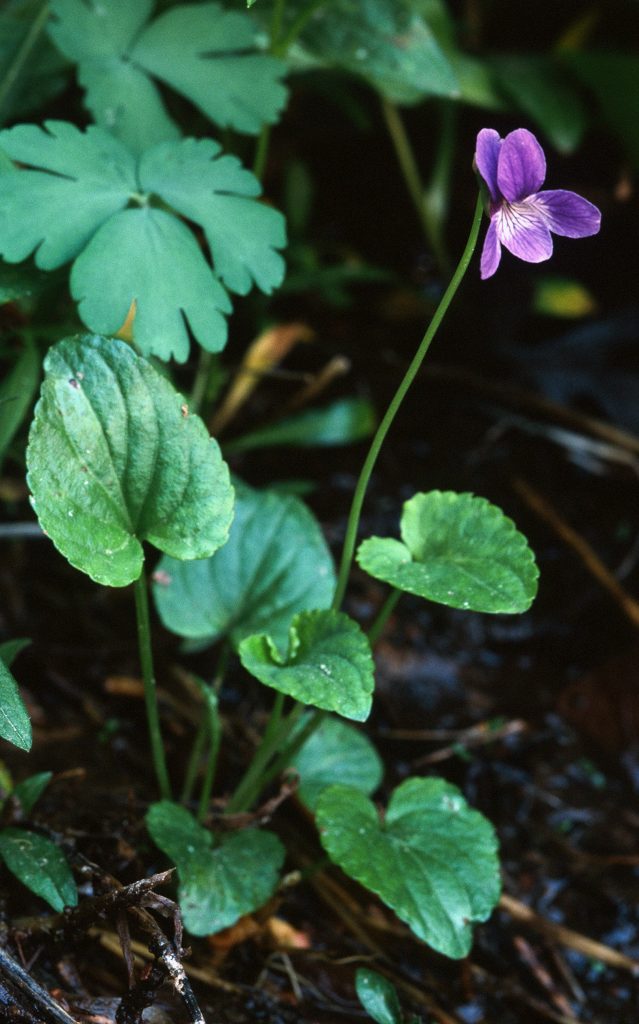 This perennial stemless herb grows to 15 cm, from a very short, stout, vertical to ascending rhizome, in older plants branching to form several growing crowns. It has relatively fine lateral roots. Early descriptions of either a prostrate rosette forming plant, or of a tall vertical plant, were quite confusing until observation of living plants explained this contradiction. As these plants grow in shade and are supplied with continuous moisture, the tissue of the petioles is very soft. The erect petioles will become flaccid and prostrate in hot weather resulting in a horizontal appearance. Competition from surrounding vegetation for the low available light might also contribute to taller plants. The plants photographed were vertical. Petioles and peduncles are usually longer than those of V. nephrophylla, up to 14 cm long.

The leaves are longer than wide, up to 1.6 x, ovate to triangular, the summer leaf blades are more conspicuously triangular. The teeth on the leaf margins of V. clauseniana are much more pronounced and pointed than those of V. nephrophylla and with fewer teeth towards the apex. The leaf margins are decurrent on the upper half of the petioles and incurved. Leaf bases are shallowly cordate to truncate, the blade obtuse at the tip.  In the center of the plant, the newest (youngest) leaves are covered with dense cilia on the upper surface and veins. Over time the leaves lose these juvenile hairs so that the oldest leaves are glabrous. The same pattern and distribution of pubescence was also observed by Brainerd for V. nephrophylla (1942). The upper leaf surface is dull dark green, the lower surface slightly paler green and shiny. Pale green stipules are adnate to the petiole for about one third of their length (free for V. nephrophylla), lanceolate to broadly ovate, serrate, up to 2 cm long. The unusually stout peduncles bear triangular bracteoles on the upper peduncle.

Relatively large flowers, up to 2.5 cm in diameter are produced from May to June.   The petals are rich, dark violet color, occasionally paler. There is a large white patch on the base of the three lowest petals, particularly on the lowest spurred petal, with fine purple guidelines. The ends of the lateral petals and the lowest petal are slightly emarginate to almost truncate. The petal spur is 3 mm long, blunt, either pale violet or green, the end of the spur with a ridge at the top; the glabrous ovary, style head and stigmatic beak are typical of subsection Boreali-Americanae. Sepals are short, conspicuously nerved, with wide hyaline margins, glabrous, ending bluntly in a terminal gland, 5.8-7 mm long; appendages are uneven, rounded and sometimes puberulent.

The seed capsules are ovoid, pale green and 6.5-8 mm long; prolific cleistogamous pods are produced until development is halted by winter cold. The seeds are 1.8-1.9 x 1.1 mm, dark gray or black; the elaiosome is colourless, attached one third to half the length of the seed. V. clauseniana grows near permanently moist seepages in the shade of cliffs and trees, at 1300-2200 m. The white cliffs contain lime that binds the sandstone, breaking down to sandy, alkaline soil. Taller specimens grow amongst taller vegetation, shorter plants in more open situations but neither in direct sunlight. Companion plants are typical lime loving species: Aquilegia chrysantha, Adiantum capillus-veneris, Acer grandidentatum, Dodecatheon pulchellum, Linum perenne, Draba zionensis, Dodecatheon zionensis, and Jamesia americana var. zionensis.

This is a very rare relict species endemic only to the south-eastern side of Zion and Kolob Canyons within Zion National Park, Washington Co., Utah. In his original description, Baker wrote that the only known plants grow near a trail to the base of Weeping Rock used by thousands of tourists and, unless measures are taken to protect them, they are in great danger of extermination. At this site, the violet no longer exists. Fortunately, and unknown to Baker, other very small secret populations continue to grow within the canyons. Current molecular data now suggest that this species should be given protection as an endangered species, especially from the mule deer that graze the canyons.

Collected in partial shade of cliffs and of trees, base of Weeping Rock, on s. side of canyon, Zion Natl. Park, Washington Co., Utah, 5 July 1936.  Baker named this new species in honor of Dr. Jens Clausen, cytogeneticist, of Berkley, California.

Russell and Crosswhite (1963) analysed leaf variations of V. nephrophylla in populations from Arizona and Colorado, but not including material of V. clauseniana from Utah. They determined that the data did not support the recognition of, amongst other taxa, V. clauseniana as a distinct species, though it had not been included in the study. In 1965 Russell published V. clauseniana in synonymy under V. nephrophylla and for several years this classification was followed by other authors (e.g. Welsh et al, 1993). After work by Ballard indicated that V. clauseniana is indeed a distinct species, Holmgren et al. (2005) reinstated Baker’s original status and name.

DNA sequence data places Viola clauseniana at the base of the blue stemless violets, Boreali-Americanae, not among them (Ballard, 1999), a weaker relationship than was previously appreciated. The sequence data also did not place V. clauseniana very close to V. affinis or V. cucullata, two of the entire-leaved stemless blue species thought to be closely related to V. nephrophylla. Later chromosome analyses by Marcussen (2011) confirmed Ballard’s results.

The only chromosome count done for V. clauseniana was by Clausen himself in 1964, with the result of n=approximately 22, contrasting with the counts for all other members of the blue stemless violets, the Boreali-Americanae of n=27. Ballard concluded that current cytogenetic evidence argued for the removal of V. clauseniana from subsection Boreali-Americanae. Only further chromosome studies will solve the uncertainty of the taxonomic placement of this species.

Within the genome of V. clauseniana, Marcussen identified two additional pseudogenes, dysfunctional relatives of known genes that have lost their protein-coding ability or are otherwise no longer expressed in the cell. The disfunction occurs because the hybridization between species of different sections each with different chromosome numbers results in some unmatched chromosome pairs during cell division. The multiple copies of these pseudogenes observed within the genome may evolve into new functions.

In addition, Marcussen showed that V. clauseniana (10x) possesses a deviant copy of the ancestral Nudicaules allele that is distinct from that found in other members of the Boreali-Americanae. This evidence suggests that the decaploidisation happened more than once, which seems to be the rule in most polyploids.