Does not grow at high altitudes.

seed pods held vertically for a long time before they dehisce, cf. nearly all other violets.

From: A Guide to The Wildflowers and Ferns of Kentucky by Mary E. Wharton & Roger W. Barbour, the University Press of Kentucky, p. 222:

Taller plant than other stemless violets, very upright plants, it also flowers later than other species, in May. Near springs, seepage areas and in wet meadows.

In ‘Violets of Maine’ by Grace F. Babb, 1946 for The ARGS bulletin, vol. 4, number 6 Nov-Dec: very damp areas, along brooks, flowers are hardly purple at all but almost blue in colour.

101 Wildflowers in Arcadia National Park, Grant and Wenonah Sharpe, 1963, University of Washington Press: ‘Flowering stems at first taller than the leaves but may be overtopped later. Bogs, wet meadows and marshes.

http://plants.usda.gov:  All states east of the Mississippi River except Louisiana, Florida, North and South Dakota.

As president of the Royal Society, a position he assumed in 1778 and retained until his death, JosephBanks was able to direct the interests of the society into many corners of the world in search of botanical novelties. The world’s largest collection of plants lay before Solander, and he set to work describing the thousands of new species he was finding. His early death prevented his publishing much, but through the work of his successors as Banksian librarians, Jonas Dryander (1748-1810) and Robert Brown (1773-1858), many of Solander’s names were ultimately published. Unfortunately, the authorship of most of his names for American species must be credited to William Aiton (1731-1793), who, as head gardener for Princess Augusta of Saxe-Gotha at Kew, was the author of the three-volume Hortus Kewensis… (London, 1789), in which most of the names were formally established. Even the efforts of Francis Masson (1741-1805), one of Kew’s foremost collectors, who worked briefly in Canada, were relegated to obscurity in a similar manner.

Notes from all my written pages (red folder) and drawings, A 33. NOT AGS Encycl.

Viola cucullata Ait. (V)–see Vol. 2, p. 1380. Acaulescent perennial. Leaves 6-8cm long at flowering, glabrous, ovate, tip attenuate, veins of leaves almost parallel, base deeply cordate often curled inwards on new leaves, sinus narrow; petioles glabrous.   Darker blue eye in middle of blue-violet flower is concentrated at the base of the top two petals and some on lateral petals to give the hooded appearance referred to by its name, (this distinguishes it from V. sororia which has darker markings on base of three lower petals), sepal plus auricle to 2cm, sepals sharply acute, auricles long; lateral petals with dense clavate hairs, spurred petal shorter and narrower than laterals; spur purple, 2-3.5mm. Capsule on long, thin, vertical peduncle, capsules green, glabrous, narrow, long-ovoid, 8–13mm long; sepals on pod recurved; auricles equal to half or almost as long as the capsule, 5-10 mm, straight. Mature seed dark olive-grey to black. 2N=54. This species is often confused with Viola sororia, but is quite distinct. Hybridises with closely related species V. affinis, V. Xpalmata, V. sagittata, V. sororia where they meet in the wild, also with V. blanda. No perfume. Sun or shade. Range also west to Ontario and Minnesota. Hardy to at least –20 C. Suitable for wet to very wet areas, but does not form large clumps.

Unopened petals of buds white, when flower is open petals are paler on the reverse side. 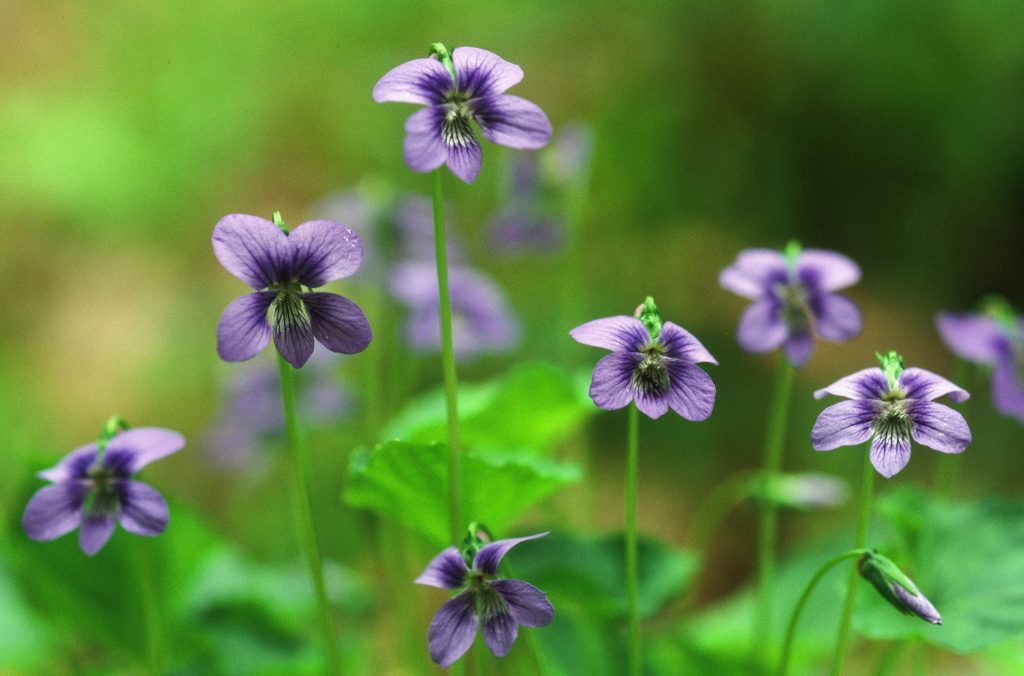 At Walnut Run, on Lancaster/Lebanon border, 3.3m e of 72N on route 322, V. cucullata is found on both sides of the road, in very wet places, sometimes in standing water. On north side soil is diabase, neutral pH, but it was where the diabase runs out in the north. In the Triassic period the tectonic plates stretched and cracks formed which were filled with sediment from surrounding rock forming areas of sandstone. In this area the molten lava exuded to form diabase in narrow strips. Diabase is high in Nickel, Mg and Calcium that makes it different from serpentine that has no Ca. It is the Mg/Ca balance which is important not whether Mg is high or not!! The diabase produces circumneutral soil with large boulders. On south side of the road is metamorphic sandstone with ericaceous (Kalmias, gaultheria) undergrowth, and is quite acid. In one wet area near the road, V. cucullata and V. blanda have hybridized producing pale blue flowered V. cucullata with no ‘hood’, also very pale blue V. pallens. I saw this same hybridization at John Gyer’s also. Viola pedata is also present in this area in its concolorous form. Best photograph of V. cucullata down near creek on north side was 16 May 1999.

Therefore, V. cucullata is not fussy about the pH of the soil, as it is growing on both sides of the road, also grows in full shade to full sun. Just need more moisture.

Cultivar ‘Alice Witter’ has white flowers with a deep pink-purple centre. Some of its characteristics resemble V. sororia (shorter petioles, rounder leaves, wider than long, short basal lobes, wide sinus, short sepals and auricles) and some of V. cucullata (short spurred petal, clavate hairs on lateral petals, fewer seed capsules, taller, thin peduncles but not as tall as cucullata, long narrow capsules and grey seeds).   It is most likely a hybrid between the two. Seeds are mid to dark grey to black , 1.7-2.0 x 1.0-1.3mm.

Unknown from Lennettes, which I think is a cucullata hybrid, has seeds very dark grey to black, 1.6 x 1.0mm.

I can’t agree with Mike Hardman that one should ignore the flowers when distinguishing the difference between V. sororia and V. cucullata. The word ‘cucullata’ means hooded, referring to the appearance of the flower. The flowers are usually a more blue colour than V. sororia, and on the top four petals, the base is heavily marked with dark blue, which gives the hooded appearance. V. sororia is usually marked on the bottom three petals, but not with such a dark blue, and not such a concentrated mark. The flowers are held well above the leaves, on long peduncles. The bottom petal is equal in length, or shorter than, the length of the two lateral petals (V. sororia has a bottom or spurred petal longer than the laterals), and the hairs on the lateral petals are clavate (straight in V. sororia). Pure V. cucullata has clubbed hairs less than 1m long while the hairs on V. sororia are filamentous and longer then 1mm. Auricles of the sepals on the flowers are not elongated, but they are on the seed pods, as pointed out by Mike. Viola cucullata is usually growing in very wet places, V. sororia in drier places. The markings on the top four petals of V. cucullata are variable, not always very dark, so this character may not be the only one to take into consideration, but combined with the leaf shape, clubbed lateral hairs, and length of peduncle relative to the height of the leaves, and the relative length of the bottom petal. The whole plant of V. cucullata is very vertical, where V. sororia may be more spread out sideways.

[written later: Another important difference is the pattern of veining on the leaf. The veins of V. cucullata all radiate from the point of attachment of the petiole, so the veins make lines towards the tip and are almost parallel to the midvein. On the leaves of V. sororia, the lower veins also arise from the point where the leaf is attached to the petiole, but the upper veins arise from the central midrib, then spread out towards the outer margins at approximately 45 degrees.]

From draft of article written for NARGS, later condensed:

There are two large and three small species of stemless blue violas with undivided leaves. Viola sororia and Viola cucullata are quite common, but are often confused. They are large, more vigorous plants especially later in the season. Viola sororia grows in well-drained woodlands, has leaves about as wide as long. The flowers of Viola sororia are usually purple, but color variants occur, including one of white flowers heavily striped purple in the center, sometimes referred to as the Confederate violet. Flowers are at about the same level as the top of the leaves, the lowest petal is narrow and longer than the laterals, and there are straight hairs on the inside of the two lateral petals. Viola cucullata grows in wetter places, has bluer flowers on very long peduncles, leaves longer than wide, and more gradually pointed. The top petals are heavily marked with darker blue, giving the flower a hooded appearance, for which it is named. The lowest petal is shorter than the laterals, and the hairs on the lateral petals are club-shaped.

1-2 May, 2010: Yet again, at Shartlesville, there were several plants of a pale blue flowered viola (RHS 91A) growing in with Viola cucullata near V. blanda. The leaves were similar in shape to V. blanda. See photos. Also at John Gyer’s, at Walnut Run, Dolly Sods, Dunbar Creek.

Puzzled by the affinity of the high-polyploids to back-cross with Stolonosae, I did a partial analysis of the plant we collected from Hickory Run State Park and that you suspected was a hybrid between a Boreali-Americanae taxon [V. cucullata] and V. pallens.   It is not a hybrid, as it has a single MELVIO copy of GPI, but more likely a deviating colour form of something.

Digital Flora of Newfoundland and Labrador.

I have maintained for a long time that in most populations where V. cucullata and V. blanda are growing together, hybrids between the two can be seen.  I have taken photos in the past, but the best example I have seen was this spring.  The photos clearly show the V, blanda shaped leaves, larger than V. blanda but quite characteristic and different from V. cucullata with pale blue flowers showing light cucullata markings on the top four petals.  Both V. blanda and V. cucullata were growing in the same area.  This is the fifth site where I have observed this hybrid, once even with Harvey in SW Pennsylvania.

Viola cucullata grows in these three habitats within the Oconee National Forest, Georgia

For V. novae-angliae, distribution is one of the clues to species identification.

V. septentrionalis: hairs on all petals, hairs on peduncle

V. sororia: Hairs on lateral petals only, leaves, peduncle and petioles pubescent or not

The specific name ‘cucullata’ is not especially appropriate except to plants that grow in open bogs; those that grow in the shade have leaves as widely spread as those of any other species. All violet leaves are involute in the bud. When expanding they have the shaped of a monk’s hood, the basal lobes being rolled in so as to touch each other; and when full grown, if evaporation is excessive, they all tend to revert to this natal condition. Viola cucullata, more than any of its allies, affects a cold situation. It thrives near perennial springs and along cold brooks. It is the common violet of mountain regions [Mt. Washington], where it is often found on wood-roads and along highways.

Replaced in the south by V. sororia when conditions not so cool?