Viola guadalupensis is a rare, endangered and highly protected species. Small golden yellow-flowers and details of style morphology place this violet in section Chamaemelanium grouped with V. nuttallii and V. vallicola. However, Viola guadalupensis plants, leaves and flowers are much smaller than others of the V. nuttalliicomplex; the leaves are darker green, shinier, thinner in texture and more triangular in shape, though the petioles and peduncles are relatively longer. It appears that this is a relict species whose range has diminished to a last few suitable pockets. The species was discovered in 1988 within the Guadalupe Mountains National Park of southwestern Texas by a park service ranger, Brent Wauer. He described his single small colony as comprising only about 35 plants, shaded by two Douglas Fir trees. As a result of targeted searches for similar microclimatic niches, three additional populations have been discovered inside the park, each at the same elevation and each with a limited number of plants. It hides in slot-like drainage chutes, down from the tops of the sheer limestone cliffs. Access to these sites is very difficult as the canyon walls are usually vertical with narrow, intermittant ledges, the aspects west-southwest facing, northwest to true north, and from full sun to full shade of the rock faces. Due to the extremely dry atmosphere, this species is vulnerable to random lightning fires, one of which narrowly missed two sites in 2000. Plants grow to 10 cm tall and are glabrous throughout. Each plant of this herbaceous perennial is deeply rooted into rock fissures by a pale cream thickened, fibrous, taproot and finely spreading lateral roots. 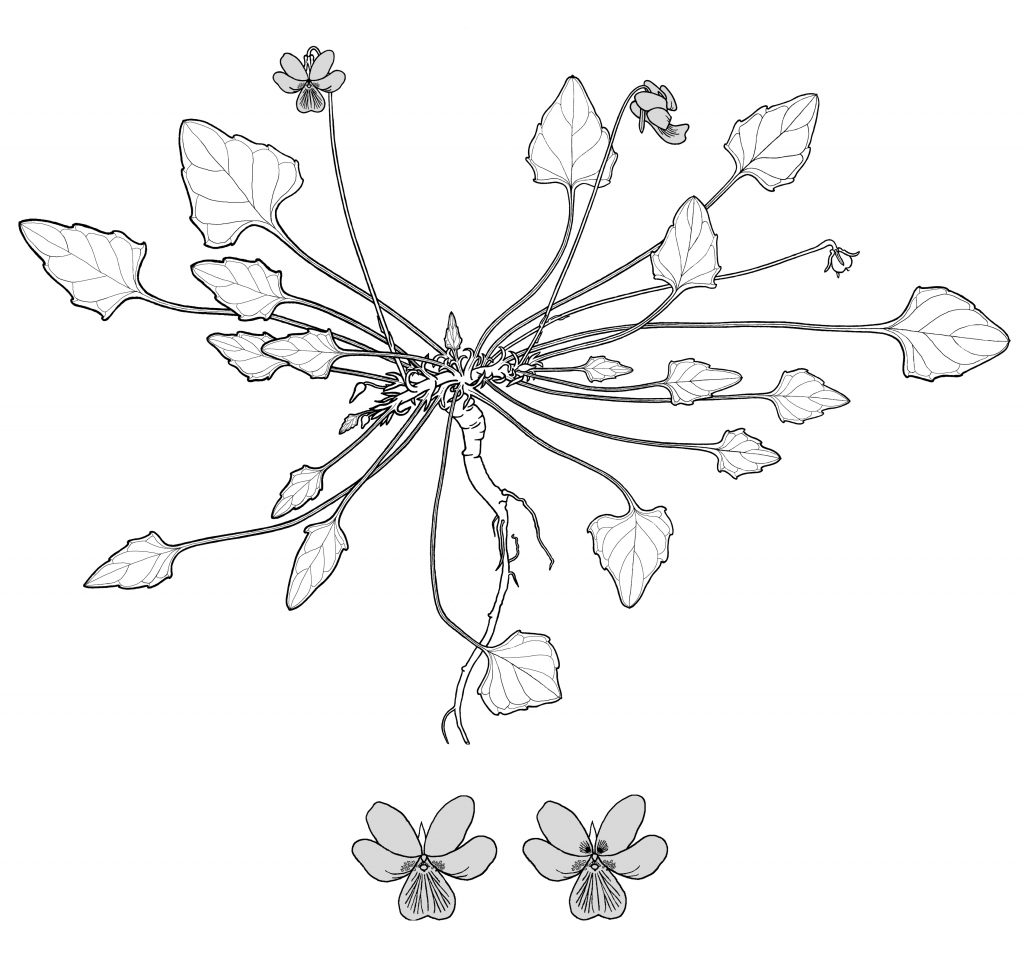 After the cotyledon stage, newly germinated plants of V. guadalupensis produce two opposite pairs of basal leaves, so each plant starts with 4 basal leaves. Plants develop several very short, thick, horizontal stems, 1-4 cm long. They have very short internodes and closely concentrated cauline leaf bases. Stems, petioles and peduncles are green. Some of the plants appear to be many years old. Individual plants photographed at the discovery site can still be identified more than 20 years later. The leaves and petioles are mostly pendulous. Persistent dead leaves from previous seasons hang down the cliff-face below the new season green leaves. Small triangular leaves are borne on petioles 3 or more times longer than the leaf lamina, petioles are narrowly winged. There are numerous, dark green, shiny leaves, entire or with 1-3 teeth per margin; the two basal leaves produced per stem are larger than its cauline leaves, wide-ovate to triangular, tip rounded, base truncate, 1.5 x 1.5 cm; the cauline leaves are lanceolate to ovate, leaf bases truncate to attenuate, apex acuminate to acute, 0.5 cm–2.3 cm long, 0.4-1.3 cm wide. Basal stipules are lanceolate, colourless to red-purple, 2.5 mm long. Cauline stipules green, relatively long, narrow, linear-oblanceolate with 0 – 2 very small divisions at the base, others with 2 – 3 very short, glandular-tipped fimbriae at the base, adnate to the petiole, the free portion reflexed, 3-15 mm long. Peduncles are longer than the petioles, axillary, 3.5-6.0 cm long; bracteoles 1.5-3 mm long, green, tapered with short fimbriae on margin, about the mid-point of the peduncle.

Flowers are carried above the leaves, 1. 2 cm wide and long. Petals vary in width between plants; upper petals are red-purple on the reverse, noticeable on the unopened buds, also sometimes marked dark purple-brown at the base of the inside. The lateral petals are bearded with yellow club-shaped hairs, and point upwards. The lowest petal is concave for the first few days after opening, then may recurve; the end is notched. It is wider than the other petals. The guidelines are red-purple, dark-purple or black and are also visible on the outer petal surface. The spur is yellow-green, 1.0 mm long, rounded at the end and in section. The ovary is green; style head with a central depression and a short upturned beak, papillose on the sides and back; the stigmatic opening is small. The calyx is 3.5 mm long; sepals have a rounded end thickened with a terminal gland; the sepal appendages are short. Seed capsules are small, obovate, light green with light red-purple colour towards the base, 2.5-4 mm long. Each pod contains 1 to 6 relatively huge seeds, mid-dark brown and slightly mottled, 2.0 x 1.25 mm including a long, translucent elaiosome that runs 1/3 to 1/2 of the total seed length. Heavy predation on leaf blades and seed capsules, probably by rodents, has been observed. No cleistogenes. The colonies grow in cool microclimates, much cooler than the summer temperatures of the surrounding open areas at the same altitude, usually approximately 30C. Seeds of violets are spread by ants, that store them in their nests in the cracks of the rock. The elaiosome provides food for the ants, and the seed will later germinate in this new location. The Guadalupe Mountains receive very little if any moisture from March till the onset of the monsoon rains beginning in June and continuing through to September. Associated vegetation sharing the same habitat are Amelanchier utahensis, Fendlera rupicola, Ostrya knowltonii, Petrophytum caespitosum, Pinaropappus parvus, Valeriana texana.

Location: Guadalupe Mountains National Park, Culberson County, Texas, altitude 2377 m (7800 ft, not 8000 ft as Powell and Wauer wrote). It was described from a single population on the East Rim of the Frijole Ridge, on one small 4m x 5m section of a dolomitized limestone wall, in the shade of two Douglas Fir trees (Pseudotsuga menziesii). The population has been marginally increasing, from approximately 35 plants in 1988, to 75 in 2001 and in 2009 an estimated 95 plants. Guarded by a rattlesnake! All three new populations recorded between 2008 and 2009 are within 10 km2 of the type locality. There is a 1000 m canyon, oriented northwest-southeast, separating the populations into two clusters. Each evening, air mass would draw cooler air through the canyon. Nomenclature and Taxonomy Section Chamaemelanium Ging. subsect. Nuttallianae M. Baker.[This subsection level may be abolished, according to Marcussen, 2011.] Viola guadalupensis A.M Powell & B. Wauer, Sida 14 (1):1-6. 1990. Since the initial publication of V. guadalupensis as a new species, details of the location were lost. It had to be rediscovered and we were very grateful to Brent Wauer for discretely marking the final approach. Plants from the first two sites have providedmaterial for chromosome analysis and a chromosome count.Additional morphological, ecological and cytological information has been collected (Marcussen, Blaxland et al., 2011-12?). Because of the endangered condition of the few colonies of this rare violet, access to its locations is strictly controlled by the management of the Guadalupe Mountains National Park. A tetraploid species (2n=4x=24), where ‘x’ is the base chromosome number for section Chamaemelanium. In the original description of V. guadalupensis, Powell & Wauer (1990) suggested an affinity with subsection Nuttallianae (W.Becker) J.Clausen, a diploid-polyploid complex (2x to 8x) endemic to central and western North America and comprising ten species (Ballard et al., 1998). Phylogenetic reconstructions now show that V. guadalupensis originated through hybridization between unidentified members of subsection Canadenses (paternal parent) and subsection Nuttallianae (maternal parent), followed by a doubling of its chromosomes (alloploidy). Violaguadalupensis is unusual among allopolyploids in possessing characters that point to both of its ancestral subsections, i.e. the rock-dwelling habit and absence of cleistogamous flowers pointing to subsection Canadenses and the presence of yellow flowers to subsection Nuttallianae.The evolution of V. guadalupensis is dated to approximately 8.6 million years ago, suggesting the species evolved well after the Guadalupe Mountains formed some 12-13 million years ago.