Viola lithion is one of three violets discovered in the period from 1980-1990. Its existence is endangered because of the small size of the two known populations, though it is unlikely to be disturbed as the sites, at 3050m (10000 ft) in the Great Basin region, are very difficult to access. Future searches may enlarge the number of sites as has happened with the other two new species, V. frank-smithii and V. guadalupensis. For the present, its remoteness is in its favour for survival; the highest risk to this species may be a forest fire or global warming, otherwise nothing worse than occasional grazing by Bighorn sheep occurs. 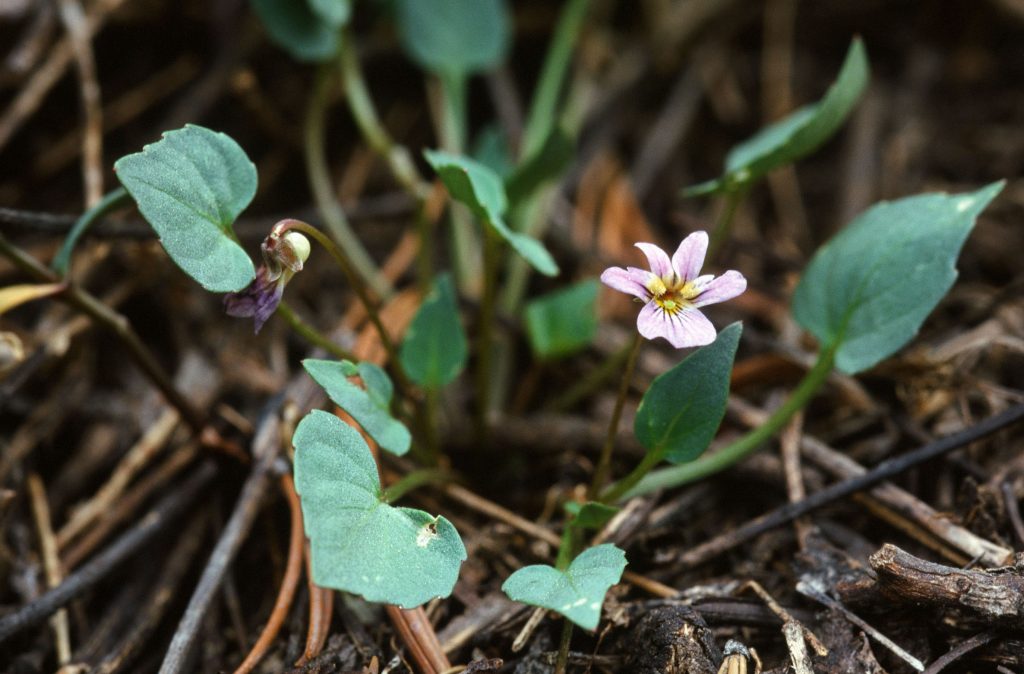 This small, stemmed, sub-alpine violet reaches a height of 5-15 cm. It has diminutive heart-shaped leaves held horizontally on long petioles and tiny flowers typical of the shape of V. canadensis and V. scopulorum. The whole plant is usually glabrous or the petioles sometimes finely puberulent; stems up to 11 cm long are prostrate, inclined or vertical, green-purple above ground. The vertical rhizome, 1.5 cm long, sometimes with branches but never stolons, has its crown approximately 1 cm below ground level (as with most other species of this subsection Canadenses). From the rhizome there are numerous lateral roots. 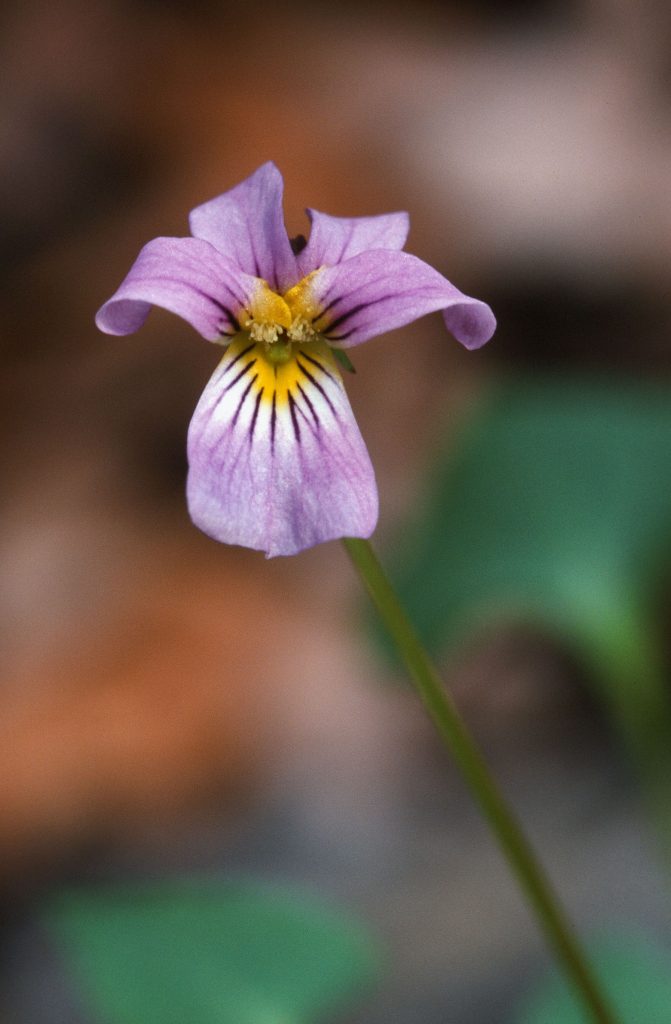 Leaves are both basal and cauline, margins dentate; the basal petiole is up to 10 cm long, cauline petioles shorter; basal leaves are cordate, paler under with cordate bases and an acute to attenuate tip; cauline leaves are ovate to deltate, longer than broad with tips attenuate and bases shallowly cordate or truncate. Stipules are free, with short fimbriae on the margins; basal stipules are deltoid, 0.5 cm long; cauline stipules are scarious, persistent, lanceolate, to 0.25 cm.

Peduncles are borne in the axils of stem leaves. Bracteoles at the middle of the peduncle are obtuse at the tip, 0.09-0.2 cm long, with few short fimbriae on margin at base. Flower size is 0.7-1.1 cm long x 0.7-0.9 cm wide. The petals are typically pale violet but variable in density, either paler or darker with a bright yellow centre, the lower 3 petals have pronounced purple guidelines. The outside petal surface is dark red-purple especially obvious on unopened buds. The top and lateral petals are much narrower than the truncate lowest spurred petal; clavate hairs on the inside of the lateral petals are colorless on the yellow background. Its very light green spur is 0.1 cm long, large relative to size of the flower, rounded and globose. The style head is bilobed and bearded on sides and back. Calyx short, 2.9-5.0 mm long; sepals short, lanceolate, dark green-purple; appendages/auricles short, rounded to truncate, thick in section, purple, 0.35 cm long. Flowers June to August.

Seed pods are subglobose, glabrous, pale green spotted with red-purple, 5 mm long, with very short recurved sepals; their peduncles are elongated and prostrate. Some pods are eaten by rodents. Mature seeds are dull, dark brown, 1.8 x 0.9-1.0 mm with no obvious elaiosome. However I saw an ant carrying away one of the seeds so they must still be attractive in some way.

V. lithion grows from 2600 to 3200m (8530-10600 feet) in the White Pine Range, on Currant Mountain, eastern Nevada. It is also endemic to the southern part of the Pilot Range around Pilot Peak in adjacent northwestern Utah. From Noel Holmgren’s original paper (1992): ‘The rock violet has a peculiar distribution on different substrates on two mountain ranges separated by a great distance, the White Pine Range populations on limestone and the Pilot Range plants on quartzite. It is to be expected on some of the intervening mountain ranges. The difference in rock type in the two mountain ranges harboring the violet is considerable, which suggests that the chemistry of the substrate is not a factor in its distribution. at the time of Pleistocene glacial it very likely would have shifted to lower elevations, probably to the very base of the mountains.’

On Currant Mountain V. lithion has a short growing season, being under snow for more than six months of the year. The climate is cool and dry. It grows at the top limit of the Bristlecone Pines in a band that appears to be alpine tundra, in moist fine silt, though the underlying rock tallus is dolomitic or occasionally limestone with organic matter mainly from decomposing pine needles. It is constantly watered by melting snow from higher elevations. Many violet plants located under the protection of low brush are taller than those in open sun. Fewer violets grow in the rock crevices at the base of the vertical cliffs.

The base chromosome number of subsection Canadenses is x=6 (Clausen, 1964). Comprehensive molecular studies of populations and species in this group have put the narrowly distributed western US endemics (V.cuneata, V. flettii, and V.ocellata) together in one small group, at the base of the complex, suggesting an original coastal ancestor, followed by dispersal down into Mexico, two Mexican endemics (V. flagelliformis, V. galeanaensis) being higher up in a tight group and eastward across North America and finally stranding of some ancestral V. canadensis populations in the Intermountain Basin that eventually became V. lithion (embedded among V. canadensis at the top of the tree). The rock violet’s retreat to its higher altitude subalpine distribution most probably resulted from gradual climate warming since the last glacial period. As all counts for the eastern North American V. canadensis are 2n=24 and the only other counts for the subsection, V. scopulorum and V. cuneata, are 2n=12, eastern V. canadensis may be the only tetraploid species. (Harvey Ballard, pers. comm.).