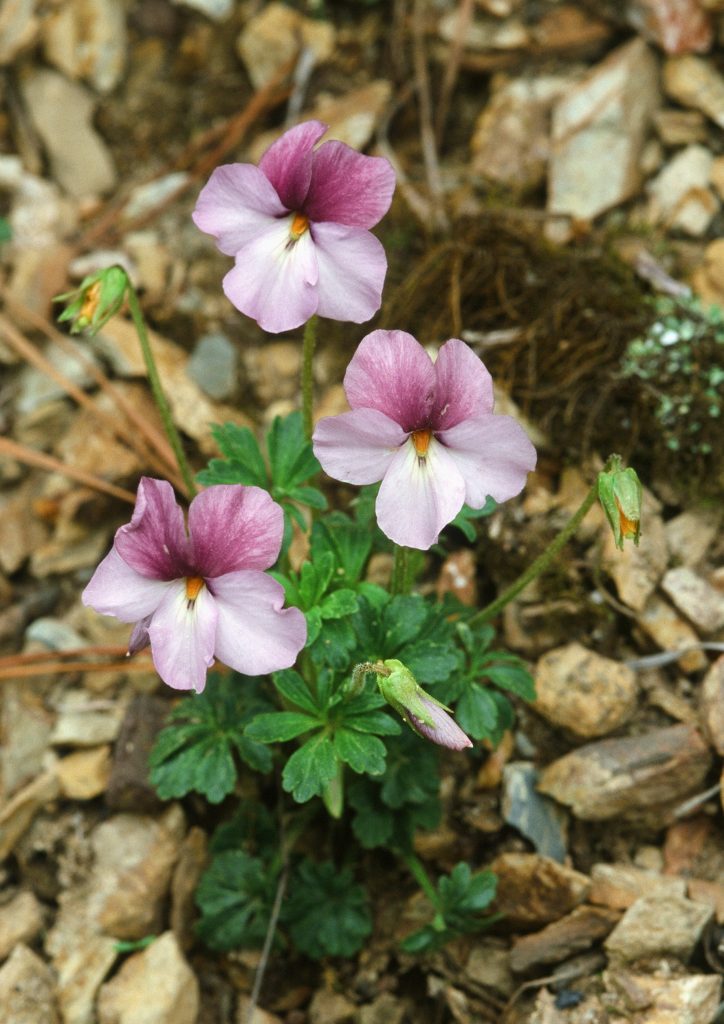 Viola pedata, endemic to North America, is one of the loveliest violets, distinctly different from all other species.  Deeply divided leaves give this species its name, the divisions radiating from the center of the leaf with additional divisions at the ends of each narrow lobe. Large showy bicolored or single coloured flowers, in shades of mauve to lilac and dark purple, are produced in profusion in spring often in massed colonies that form spectacular sheets of color along roadsides.

The first specimen of Viola pedata, collected in 1688 and named by Linnaeus in 1753, had bicolored flowers. After 1789, additional names were published for the bicolored form, but when it was realized that Linnaeus’ specimen was itself bicolored, the additional names became illegitimate. Both the bicoloured and single-coloured (concolorous) forms are now included under the species name V. pedata with no recognized varieties or forms of either flowers or leaves. V. pedata is extremely variable in flower color, flower form, plant height and leaf shape. Such variation is unusual within a violet species and is discussed below. Flowers exhibit wide diversity between colonies or even between single plants.

Stemless plants arise from stout, vertical rhizomes. Branching of these rhizomes can result in multi-crowned plants. Its roots are thick with fine rootlets. Adventitious shoots can produce new plantlets from the roots if the growing crown is damaged. The stipules are adnate to the base of the petiole for half the length of the stipule, their margins being both fimbriate and ciliate. 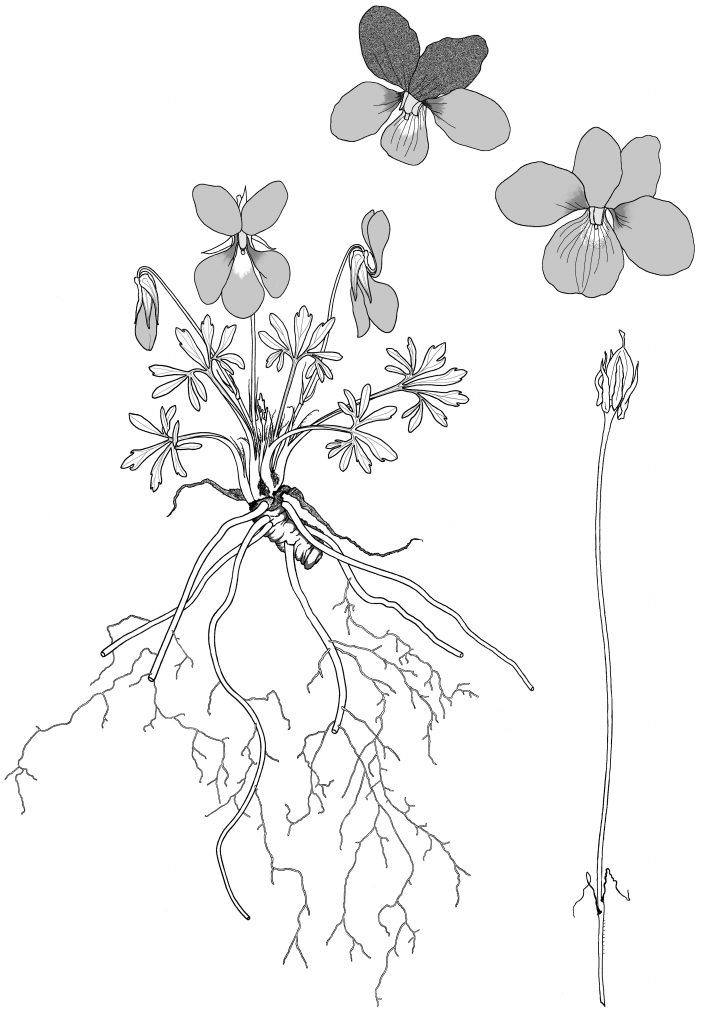 ‘Pedata’ does not mean ‘divided like a bird’s foot’ as is often written. The meaning of the word ‘pedata’ in Stearn’s Botanical Latin is ‘palmate, but with the lateral lobes or divisions themselves divided’.   However, in reality leaf shapes are highly variable in the number and width of the lobes, and the presence or absence and depth of the primary or secondary divisions. Plants often produce two types of leaves during the growing season. At flowering time glossy new leaves are small with wide leaf lobes, but leaves produced for the hot dry summer months may have much narrower, longer divisions reducing leaf surface area and hence evaporation. In the fall, the plants revert to producing small leaves with wider lobes.  Fine cilia occur on the upper leaf surface on both the veins and lamina and on the margins, but the lower leaf surface is glabrous. The ciliate winged petiole margin is curled inwards. There is a prominent gland on the tip of each leaf segment or lobe, also one large gland in the axil between segment. This characteristic is also seen with V. pedatifida but not V. beckwithii both of which possess glands on the segment tips.

Large flowers measure up to four centimetres across (one and a half inches) but can be smaller. The face of the flower is flat with a shallow throat from which the style projects prominently, surrounded by orange anther extensions. On the inside of the lateral petals there are no guidelines and no hairs. Petals can be round or narrow. The two upper petals of the bicolored flower form are dark velvety black-purple, often reflexed and sometimes twisted back to back. The three lowest petals are lilac, or unusually, purple spotted or streaked, and very rarely white. Colours of the concolorous flower form range from pale blue through violet to deepest lilac, slate blue, almost white to pure white without purple guidelines, and rarely, pink. They can be with or without a central white eye and with variable patterns of veining on the lowest petal. The spur is dark purple, 1.5 mm long and 2.5 mm wide, but flat in section. Flowers have no perfume.

Unlike most other violets in North America, this species propagates only from open pollinated flowers (no cleistogamous pods).  A study of Viola pedata by Becker and Ewart (1990) showed that cross-pollinations resulted in significantly greater quantities of seed than did self-pollinations, indicating that a self-incompatibility system is operating in this species.  The greater genetic variation resulting from a higher rate of out-breading is responsible for the greater variation seen between individual plants. It also allows this species a greater chance of adapting to new conditions, and hence, of survival.  Most violet species do not produce as many ‘open’ or chasmogamous pods per plant, instead producing large amounts of seed from ‘closed’ or cleistogamous pods in summer through autumn.   By contrast, V. pedata  produces openly pollinated pods over a long period from its mid-spring peak into summer; occasional flowers may still be seen with the first snows of late autumn.   Because of the higher rate of cross-pollination, V. pedata is evolving at a greater rate than those species reproducing by both chasmogamous and cleistogamous seed production.  Flowers are pollinated by many vectors: insects, small flies, ants and butterflies. Seed pods are well camouflaged by their dark purple colour and because the peduncles are weighed down by large developing pods till they lie flat on the ground, hidden by the larger summer leaves or surrounding leaf litter. Pods are large, 1.0 cm long, glabrous, pale green-brown; seeds light to mid honey-brown, 2.4-2.5 x 1.1 mm.

Plants of V. pedata grow naturally in the very poorest, extremely well drained soils. They only thrive in acid locations and open sunny areas: gravel, rocky screes, sand, schist or shale barrens, where there is no topsoil, often in dry open oak-pine forest, pine barrens or plantations. The habitat of V. pedata is preserved and encouraged by road building, removal of roadside trees, removal of topsoil and competitive vegetation, exposure of deep sloping road banks, and clearing for power-line corridors. They flourish with amazing abundance along freeways or at interchanges, tolerating road salt, heavy wet plowed snow and regular highway mowing but will not survive if sprayed for weed control. When trees revegetate an open area, V. pedata will die out but the seeds remain viable in the soil for many or even hundreds of years, re-appearing when the trees are cleared again.

Cultivation requirements for this species are often misunderstood. This is not a woodland plant nor will it grow in a cement trough. It will grow in deep, pure sand with no additives, no fertilizer, and no added water. Though it is very hardy in hot dry weather and with winter temperatures to at least -20° F. (-30° C.) it will not survive mild wet winters. Viola pedata is only happy where it gets a lot of sun, has very sharp drainage and is not crowded out by surrounding plants.

This species occurs in the southeastern corner of the Great Plains: in Iowa, Kansas, northeastern Texas, Oklahoma, Arkansas and Missouri, extending east to the pine and oak forests of the sandhills in eastern North and South Carolina that separate the Piedmont from the coastal plain. They are continuous through the shale barrens in the rain-shadow along the eastern slope of the Appalachian mountains, from Georgia northeast through West Virginia, Virginia and Maryland to south central and eastern Pennsylvania; and again in the sandy pine barrens of New Jersey and north into Massachusetts.

There are strong morphological similarities with V. beckwithii that also has bicolored flowers, large open flat flowers, no cleistogenes, similar fibrous leaf texture, narrow leaf lobes, glands on the tips of the leaf segment, the same pattern of pubescence and similar rhizome and root systems.

Details of the complicated origin of this species, are described in the chapter on violet Evolution. Viola pedata is a decaploid, with chromosome number 2n=56.

Polyploidy plays a crucial role in creating diversity in plants. The base number of chromosomes in a species is represented by ‘x’. V. pedata is a decaploid species (2N=10x=54), the result of ancient hybridization events between three diverse North American lineages 12-14 million years ago.   The three ancestors were from the diploid yellow-flowered section Chamaemelanium series Nudicaules (2n=2x=12), the tetraploid white-flowered section Plagiostigma (2n=4x=24) and the tetraploid purple-flowered section Viola (2n=4x=20). Although this 10-ploid species should have 2n=56 (12+24+20), one chromosome pair has been dropped, leaving the 10-ploid level of 2n=54 (Marcussen, 2011).